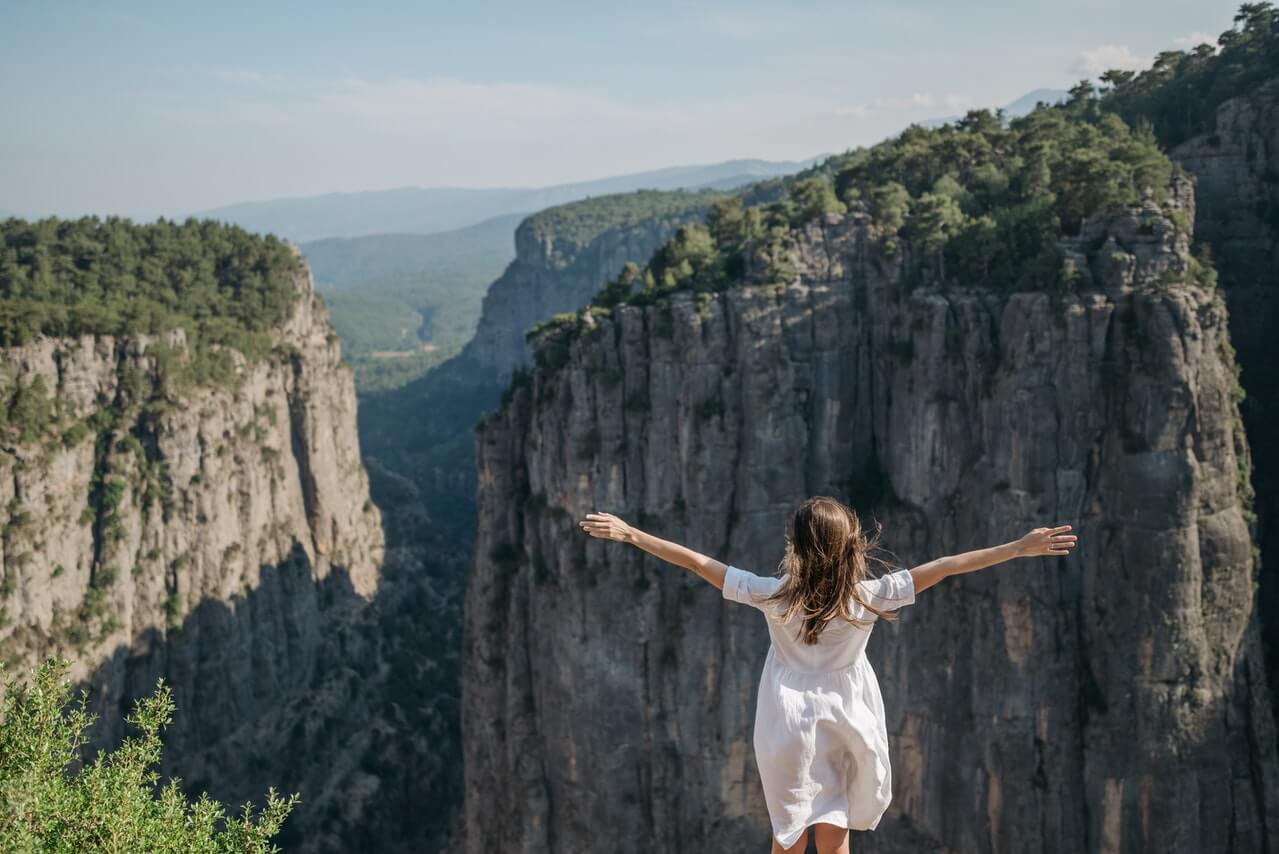 Veganism is a philosophy and way of living which seeks to exclude—as far as is possible and practicable—all forms of exploitation of, and cruelty to, animals for food, clothing or any other purpose; and by extension, promotes the development and use of animal-free alternatives for the benefit of animals, humans and the environment. In dietary terms it denotes the practice of dispensing with all products derived wholly or partly from animals. – The Vegan Society

Every bite of food we consume has an impact on the environment. However, some foods have a much greater impact than others. Meat production has a significant environmental impact. Every year, breeding, raising, and slaughtering billions of animals for food necessitates massive amounts of natural resources such as fresh water and land, as well as massive amounts of waste and pollution. Simply put, our appetite for meat is unsustainable, as is the factory farming system that feeds it.

However, we do not have to rely on unsustainable factory farms to feed ourselves. This is where veganism enters the picture. We can stop the rapid depletion of Earth’s resources, slow the threat of climate change, and help protect our planet for future generations by eliminating our consumption of animal products and shifting to plant-based eating.

The United Nations’ 2021 report on climate change issued a code red warning to all of humanity: the climate crisis is unfolding in real time, and if we do not act quickly, frequent natural disasters and rising sea levels will put millions of people in immediate danger. We only have a few years to reduce our greenhouse gas emissions, which will necessitate a series of cascading paradigm shifts within our global economic system as well as in our individual behaviors.

Fortunately, the report wasn’t all doom and gloom: it provided concrete, actionable steps for reducing emissions and addressing the crisis at hand. The UN recognizes plant-based diets as a “major opportunity for mitigating and adapting to climate change,” and it advises governments around the world to implement policies to reduce meat consumption in their respective countries and regions.

While new government policies have the potential to cause a significant shift in our food system, the good news is that we already have the ability to combat climate change through our food choices as individuals. Continue reading to learn how going vegan can reduce your individual environmental impact—and how these positive effects can add up to a more sustainable food system for all.

Each of us has a “carbon footprint,” which is the total amount of greenhouse gas emissions caused by our own actions. Our consumption habits in the United States generate an average of 16 tons of carbon emissions per year. This is one of the countries with the highest average carbon footprints. To put this in context, if everyone in the world consumed resources at the same rate as we do in the United States, we would require the equivalent of five planet Earths to sustain everyone’s lifestyles.

This drastic reduction is due to the fact that every step of the production process for animal products such as beef and dairy produces greenhouse gases: from the clearing of forests to make way for animal pasture, to the production of millions of tons of animal feed, to the enormous waste generated by cows, pigs, chickens, and other farm animals.

While new government policies have the potential to cause a significant shift in our food system, the good news is that we already have the ability to combat climate change through our food choices as individuals. Continue reading to learn how going vegan can reduce your individual environmental impact—and how these positive effects can add up to a more sustainable food system for all.</p

Overall, raising and slaughtering animals for meat uses far more carbon than growing and harvesting plants for food. According to Joseph Poore, the lead author of the Oxford study, “converting grass into (meat) is like converting coal to energy.” It comes at a high cost in terms of emissions.”

In fact, producing plant-based meat emits up to 90% fewer greenhouse gases than conventional meat production. One plant-based meal can save the equivalent amount of carbon emissions as driving a car across the country. If one meal can have that much of an impact, it’s no surprise that eating a plant-based diet full-time can result in a much lower carbon footprint. And, as more people switch to a plant-based diet, it will cause a massive shift in our food system, lowering our species’ overall greenhouse gas emissions and slowing climate change.

Although we hear a lot about carbon dioxide emissions in climate change discussions, another greenhouse gas, methane, also plays a significant role in warming our atmosphere. Methane is 80 times more effective than carbon dioxide at trapping heat in the atmosphere, and it is responsible for up to 30% of global warming since pre-industrial times.

The majority of human-caused methane emissions come from animal agriculture, with livestock digestion and waste accounting for 32%. This is because cows expel methane while digesting their food. A single cow emits 220 pounds of methane into the atmosphere each year. When those emissions are multiplied by the 1.5 billion cows in our global food system, the result is a dangerous amount of methane in our atmosphere.

Nitrous oxide is not the most common or well-known greenhouse gas, accounting for only about 6% of total human-caused emissions, but it is extremely dangerous. Nitrous oxide emissions remain in the atmosphere for about 100 years before natural processes can break them down, and the compound is 300 times more powerful than carbon dioxide at driving the greenhouse effect.

Plant and animal agriculture has been responsible for nearly two-thirds of all human-caused nitrous oxide emissions since 1980. And, once again, animal waste is a major contributor. Factory farm operations generate so much animal waste that they don’t know what to do with it: some of it is returned to the soil as manure, while the rest sits in waste cesspools known as “factory farm lagoons.” Regardless of where it ends up, all of this waste produces nitrous oxide emissions, which pollute the atmosphere and hasten climate change. You can help to stop the spread of pollution from factory farms by reducing your meat consumption.

We already know that factory farm waste pollutes the air with methane and other greenhouse gas emissions, but these massive amounts of animal waste can also have a negative impact on our oceans. Animal waste contains nitrogen and phosphorus, which can enter our oceans and chemically react with the water to form “dead zones”—areas where oxygen levels are too low for anything other than algae to survive. Because of the influx of animal agriculture pollution and the resulting dead zones, millions of square miles of The Gulf of Mexico are completely devoid of marine life.

The greenhouse gas emissions that warm the atmosphere also warm the oceans. The warming of the oceans initiates a process known as ocean acidification, which alters the chemistry of the ocean water, making it more acidic. Acidification can render water uninhabitable for marine life and kill entire reef ecosystems, transforming once-vibrant and biodiverse areas into barren wastelands.

The global meat industry pollutes and destabilizes our oceans, including the multibillion-dollar fishing industry. We take a stand against the destruction of our oceans by not eating land animals or fish, giving underwater ecosystems a chance to stabilize and recover.

To meet global demand for meat, a lot of land is required—so much so that about one-third of the Earth’s landmass is dedicated to raising animals for consumption. Millions of acres of forested land are cleared each year by the meat industry to make room for cattle grazing and crop production for animal feed. Deforestation is a process that releases stored carbon from forests into the atmosphere, exacerbating our climate crisis.

Cattle ranching, in particular, is responsible for the vast majority of deforestation in the Amazon rainforest, the world’s largest tropical forest. Over the course of fifteen years, the meat industry cut and burned over 111 million acres of forest, the equivalent of 84 million football fields.

Meanwhile, plant-based meat substitutes require far less land to produce. According to the Good Food Institute, plant-based meat uses up to 99 percent less land than conventional meat. We could save up to 75% of global farmland if everyone switched to plant-based diets. According to Oxford University researchers, this is an area “the size of the United States, China, Australia, and the European Union combined.” Forest ecosystems would benefit the most from the world going vegan: one estimate suggests that if we got our protein from plants instead of animals, deforestation would decrease by 94%.

Is veganism good for the environment?

Our food system is broken, and our planet is suffering as a result. However, we have the ability to create a more sustainable food system for animals, the planet, and all of us. Leaving animals off our plates is the single most effective way we can reduce our individual environmental impact. And, while it may not solve all of the world’s problems, it does help to mitigate the threat of climate change, which the UN describes as the “biggest threat modern humans have ever faced.”

So, join the movement. Save our planet by going plant-based.

Click here to know more about the other benefits of Veganism
Submit an article. Send us an email to learn more.